"D coin" is an item that can be used in a variety of applications.
Your "D coin" will be saved in your "Initial D Driver license".

* "D coin" is only item in the online mode. Not available to obtain and use when offline.

* "D Coins" are valid until the last day 2 months later when the "D Coins" were purchased. "D Coins" whose validity expires will be invalid.

* The maximum number of "D coins" to buy is 999. No money exchanges or refunds.

* Transfer or sale of "D Coins" is prohibited. If this is discovered, the Driver's License will immediately become invalid.

Proceed "D coin charge" and get D COIN.
You can select "D Coin charge" in "Initial D Factory" and also during functional tuning. 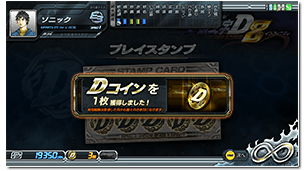 Moreover, D Coin also available when you get "Play stamp" at the end of the game then collect total 10 pcs.

• The re-challenge the Upgrade Battle

• The re-challenge the Downgrade battle

Spin Slot for "My Character Parts", "My Frame" and "Title".
Many Items are available only in here!
Get many items and show your My Character and Title to rival!

When you retry the "Time Attack", you can be appear "Ghost" as the last racing record.
And more, the distance between your car and Ghost will also be displayed.
If you want to ensure the speed of a little while ago!
Let's allowed to appear "Ghost" by using the D coin such a time!